Foundation of the Roman Catholic Mission

The Arctic Bay is found on the maps of the Vicariate of Hudson Bay very early. In 1930s though the missionary work looked very different from today, just like the life of Inuit themselves.

Arctic Bay was for example a station visited regularly from the mission in Pond Inlet. Inuit of course did not live in towns yet but in the camps more or less distant from one another and more or less permanent.

In the area between Pond Inlet and Arctic Bay the camps were situated mostly along the shore and Inuit would move often, as they followed the game (see the map and the text below). 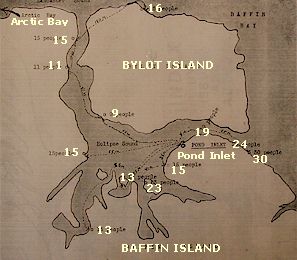 An old map of Pond Inlet area gives an idea of the immense distances involved in the evangelization of the Inuit in the early years of the Catholic mission. The camps were spread in the vast area covering hundreds of miles. The closest camp was situated at 8 miles from Pond Inlet, the furthest at around 300 miles! And the visible numbers on the map show how many people were living in each of those camps.

The route was followed generally on the frozen surface of the sea, much longer but usually much smoother than that on the land. Fathers stationing at Pond Inlet, in order to visit entire “parish”, had to cover a distance of about 840 miles, back and forth, by dog team.

Oblates were also visiting Arctic Bay, about 230 miles from Pond Inlet by dog team, as well as the Inuit camps around Arctic Bay...

Today the community of Arctic Bay is still visited by a priest, this time stationing in Igloolik and arriving usually by plane, not dog team. The mission in Igloolik is serving also the community of Pond Inlet. When the priest is present, services are held also in Nanisivik, in joined Anglican and Catholic chapel.

The community’ of Arctic Bay is located on the Borden Peninsula of the Baffin Island. Its Inuktituk name, Ikpiarjuk, “the pocket”, refers to the mountains tightly surrounding the town.

Its English name recalls whalers and explorers of the XIX and early XX century, and especially their ships, few of them named actually "Arctic"

For a short period of time in 1920s Hudson Bay Company opened its trading post in the area of Arctic Bay, then, in 1930s, Anglican and Catholic missionaries opened there their respective missions. The town itself developed since 1960s 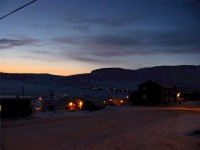 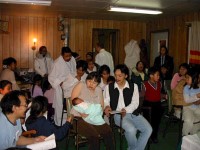 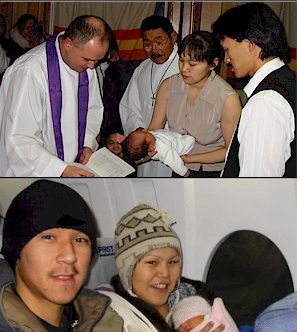