My Wonderful Friends on Their Way Home

Jesus asks His Disciples this question knowing that very soon they will be confused, sad and afraid. And just a while before He goes to the Father He tells them in John 16:16: “In a little while you will not see me any more, and then a little while later you will see me.” And in Jn 14:4 Jesus says, “You know the way that leads to the place where I am going.”
What do you mean Timut, what are you talking about? You talking as if you were going away for good. You acting strange. There is so much for you to do yet, you are still young, your children are not that old and what about Nick, Cody and Nolan? Who will replace Ittutsiavak? The only thing you must do now is to slow down with your work. You work too much, take care of your heart Timut.
Timut heard those and other words many months before he passed on. For a year or so he would speak of heaven as a place where he will only sing all the time for God's glory. That is what he wanted to do in the life to come. Well there it is. He is singing now all the time.

This was very heavy summer. Leaving for Winnipeg Tache Local Community meeting on the beginning of June was to be for me a good introduction to the vacation without a plan (for the first time in 44 years). I left then to Edmonton to visit my very good friends Denise and Francois. My trip with Denise to Peace River to visit her father battling with the cancer and accompanying him to the hospital for chemotherapy was itself very difficult. He is a wonderful person. Joyful and optimistic. You just want to say it is not true at all.
At the same time on the 16th my cousin from Ontario is sending message about her father gone missing in Poland in my hometown. I couldn't get that message though. On the 19th I arrived to Edmonton to visit my friend Fr. Frank who recently moved from Smithers to new Parish. The same day I red the message, that my cousin Linda is looking for me and it is urgent. I called her from Fr. Frank's home and she informed me that her father had been found dead after four days. Next day I traveled to Niagara Falls to see her. The visit is difficult and stressful as well. She had to make decisions whether to go to Poland with her sons or to stay. Many questions and then she says, “Why would someone murder my father”? I stayed with them for over a week. Because she needed me there at that time I changed my reservation for later. That hour on the 25th of June I spoke with Father Robert Lechat in Ottawa and Quang Van at Iglulik. About 15 minutes later they got news about Timut's tragic death in the see while hunting. I could not be reached after my conversation because I left with my cousin's family driving north of Toronto with no phone no Internet no way of contact. Quang got the message only on the 26th of June. He tried to reach me but no chance.

Only on the 3rd of July on my way to Ottawa we stopped on the road and I made the call to Fr. Robert Lechat. He gave me sad news about Timut. I have no words to explain what I felt. He also said that they would have the funeral in two hours. I was devastated and I still am today. I lost my wonderful friend. I lost my first Inuk friend that God blessed me with. Timut was to me like a brother, my first travel companion, my hunting buddy, my helper, someone I dearly love. Timut for 5 years had been a church leader (what we call up here a Catechist) in Hall Beach community.
The most painful for me is, that I did not make to his funeral. I was late. The family waited for me but could not reach me soon enough. I arrived to Iglulik on the 4th of July. I had a hard time to find myself again. Something in me was missing; I could not focus on the next think to do. The day I arrived I visited Anthony Qunnut my right hand and wonderful friend and a Catechist in Iglulik community, who accompany me through a lot of difficulties and hardships in the last few years. He is the person I would come to consol and to get explanation and to discuss my decisions. He tolled me that his cousin who used to be an Anglican minister took his life recently and it was devastating news for Anthony. Then Anthony said to me: “I thing it is a time when we, church people are going to die”. I did not want to pay attention to his ward at all. Next day I was tolled that Anthony is not well. He had to be taken at night to medical center. Three days after my arrival I got a call that one of our people had drowned in Ottawa River and his body was recovered that day. Two more days and another death - an elderly person, well known local midwife, local doctor, advisor and a wonderful Catholic soul. The same night in the evening coming home from a visit of the family which lost a loved one, a friend of mine meets me on my way home and says: ”heavy week we have“ and he continues, “our Inuit tradition says, that when older person dies, there will be a child who dies as well. That is our Inuit believe.” Sure enough two days after the funeral of our elderly person another elder dies and few hours later a child dies as well. To add to all this Anthony is taken again to a nursing station with breathing difficulty, heart problem and head pains. Nurses decided to send him by medical aircraft to Iqaluit the next day. That day in the evening Anthony's only sister Melanie dies after a long illness. Anthony cannot go to see family. He could not any more. He is very sad and speaking very little. In the morning we have the sacrament of the sick for Anthony and Holy Communion. He goes to Iqaluit with his daughter Lena. The next day Hospital sends him to Ottawa because his condition is critical. In Ottawa they inform the family that their father has lung cancer and brain tumor. Anthony never got better. My wonderful friend is passing on again. My Inuit mentor is not coming back. I prayed for a miracle every day asking God constantly what will be better for my friend at this time of his life and what would mean for him and for us when he goes to eternal life soon. After all the funerals in Iglulik passed I decided to fly to Hall Beach for two Sundays. In mean time I kept daily contact with Father Robert Lechat getting information on Anthony's situation.
Returning back home on the 11th I visited the family of Anthony and they were getting ready to fly to Ottawa to have their last visit with their father. Tickets were ready with the help of few Inuit associations and family was ready too.

Tuesday night around 8:30 p.m. we got news about Anthony's death. And now what? I asked myself. Running to the family's home and anticipating in another tragedy it seam too much, unbearable. At the same time came to me a word of St. Paul: “I can do everything in the One who strengthens me”. In 2 Cor 12:9 Paul says: “but Lord has said, my grace is enough for you: my power is at its best in weakness”. And Lord Himself saying in the Gospel of Matthew chapter 14, verse 27: “Courage! It is I. Don't be afraid”. St Paul concludes his vision in chapter 12 with the words: “For when I am weak, then I am strong”.

So I know what I am supposed to do and how to do it, if Paul is right. I take Paul's advice and carry on with my mission but it will not be easy now.

At this time, the whole community is affected by those deaths. General sadness and sorrow like a dark cloud covered the community and our spirit was silent. So many hours spend with families trying to bring something to their homes for them to eat because cooking doesn't work in the days of loss and confusion, so much pain, tears, anger. At the same time you need to be one of them to know what it is like to have a loved one die, to say goodbye. Every time someone I know dies it is like a member of my family passing away. Grieving family, becomes my family, their pain becomes my pain, and their tears become my tears. I love them so much and I learned that it hurt sometimes to love others. Well Jesus would say: “Whatever you do to the least of mine...” The loss is grave but the hope is greater as we pray in Psalm 23:1-2 “The Lord is my shepherd; I have everything I need. He lets me rest in fields of green grass and leads me to quiet pools of fresh water”.
Since Anthony's funeral the weather had been giving some trouble to hunters and travelers. The Beluga whales did not come just yet. The first winter storm had come already. No caribou gathered for winter. Someone just said that there are no animals to hunt now because a girl did not admit miscarriage she just had. Well we still have faith and traditional beliefs. One does not exclude the other. God is love.

Our beautiful and joyful times together, oh how I miss my friends. 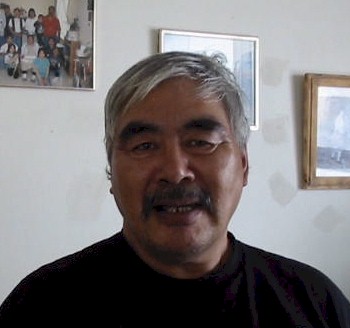 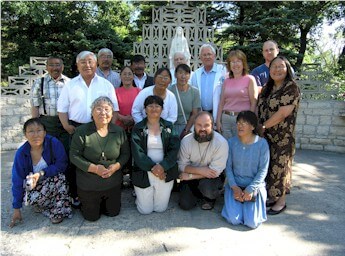