Catholic Community in Igloolik Between Past and Present

After the old Stone Church in Igloolik was pulled down in August of 2006 many local people felt upset seeing the past taken away from them even if the reason for the pulling down of the building was well understood and fair enough. The stone church was constructed in the middle 1960's and was used for 10 years but the high oil prices made impossible to operate the church any longer. At that time the new mission was build and is used until today.

When the old stone church was finally pulled down the feelings of disappointment and a sense of the loss of the local heritage made this whole story painful also for the pastor of the Igloolik community who unfortunately took the blame for the demolition. It took many months to realize that there was no way the building could be still standing. It became impossible to secure the building and prevent the acts of vandalism. All those reasons led to the decision of the systematic demolition of the stone church.

Finally today we talk again, we smile and have good words of greetings and respect for one another. It took time as we tried to understand that the safety of our children is our priority. Nevertheless Father Tony is well aware that the wound will not heal for a long time and he himself has to find the way for reconciliation within himself and with those who hurt so that they could move forward on their journey of faith.

Father Tony decided to find for himself the lost connection between the past and the present of which people are talking a lot about in Igloolik today. He headed for Ikpik Bay where Inuit used to live in early 1970's.

Few years after the Stone Church of Igloolik was completed, Father Louis Fournier OMI, (working still today in the Arctic as a veteran of the Arctic Missions) had a dream to fulfill. He wanted to establish community, where people would deepen their spiritual life away from the negative aspects of Euro-American civilization brought to the Arctic together with the construction of permanent settlements: alcohol, drugs, media and the influence of the infected culture. He wanted to build a place where the Inuit culture would be sustained, where the tradition would remain strong, where love would grow and where people would live with God in God's country. Father Fournier had a goal to form strong leaders that would lead and not only talk. His plan was good. He took some Inuit to live with him on the coast of Ikpik Bay across Foxe Basin. He established a community there and he built the Church, Mission house, three homes for families and started construction of other buildings. After about 4 years Father Fournier got sick and he had to leave Ikpik. Soon after that, people living with him in Ikpik ran out of food and other supplies and moved back to Igloolik.

The trip of Father Tony

Ikpik is located about 350 km east of Igloolik on Baffin Island. Father Tony in company of two friends made a trip that took 6 days. Wonderful landscape, abundance of wildlife and hard conditions of travel made it more unique and powerful. Spending three nights in one of the buildings constructed years ago out in the wilderness was heart warming. Visiting the history of human struggle and survival is always a powerful experience and knowing the past helps to respect more the present and to appreciate the precious gift of life. 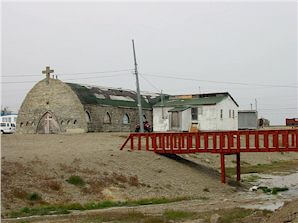 The old Stone Church in Igloolik before demolition 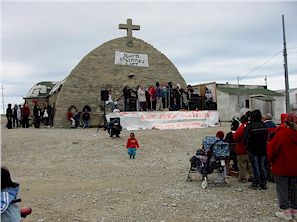 The community feast in front of the old church 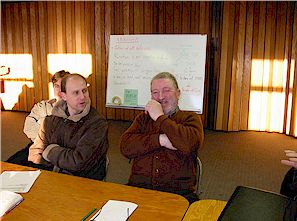 Fr. Fournier (right) shares his knowledge with the young missionaries 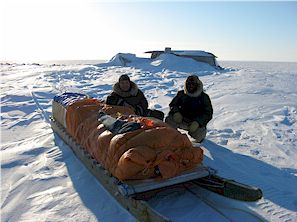 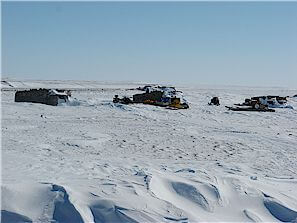 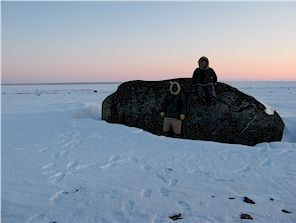 On the Arctic road