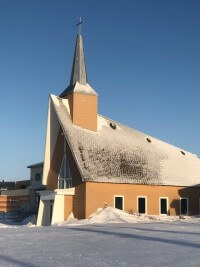 Churchill is the only community of the Diocese of Churchill - Hudson Bay outside Nunavut. At the same time, for decades now, it is a central place for the administration of the diocese. In 1929 the bishop’s residence was moved from Chesterfield Inlet to Churchill and here remains till today.

The present bishop, Rev. Reynal Rouleau OMI, is serving the diocese since his consecration in Rankin Inlet, in 1984. Having his office in Churchill, a great deal of the time he dedicates to the people of his diocese, visiting communities regularly. It takes quite a lot of traveling in the area that covers over two million, three hundred thousand square kilometers... Even with today’s facilities, airports and planes, it takes more than one day to reach some distant parishes. In the past it took even a little bit more...

For many years Churchill was also a meeting point of the missionaries on their way to the North and on their coming back for medical examinations or sometimes for few months of holidays. But this “coming back” wasn’t just easy like to say - Well, I think I’d go to Churchill. Oblate news announced in 1947:

Father J. Cochard arrived to Churchill at the end of February. He had been on the way for five months. Through the courtesy of Mr. W. E. Brown, District Manager of the Hudson’s Bay Company, he was able to travel the last 350 miles by airplane.

Though Churchill is the headquarters of the Hudson Bay Vicariate, Fr. Cochard, wandering in the vicinity of the North Pole, had not seen it for the last 13 years...

And Even More Interesting News From 1944:

It happens to nearly everyone at some time or other to have to pay the dentist a visit. This is never pleasant, but it was even more difficult than usual for one of our missionaries, Fr. Trebaol, from the mission in Igloolik. He arrived to work in the diocese seven years ago. At that time he was in the best of his health and spirits. His spirits are just as high as ever, but his health has suffered... His eyes were affected from the use of lamps burning kerosene and seal oil during the long polar nights, and his teeth decayed one by one due to the lack of proper food and vitamins.

Medical attention became necessary and the Father left his mission for a trip... Leaving on January 17, he covered more than a thousand miles by dog team before arriving at Churchill, May 14. Then it was another thousand miles by rail before he arrived at the dentist’s office.

All this is only half of the story as he still has to return. He will reach his mission sometime around Christmas.

Early missionaries working in the Arctic in many ways had to embrace the Inuit life style thus acquiring a first hand knowledge of the life of the Inuit. They became also naturally interested in preserving what was representative for the culture and tradition of the people indigenous to the North. Personal notes of the missionaries show that they did not only preach to the people but studied their culture. Very often it was not maybe a scientific, anthropological research, but rather an account of life they were sharing daily for many years. This account was not meant to be kept in secret, but was shared with everybody, as far as one was interested in the subject. This sharing took mainly two ways: publications and museum .

Images of the Cathedral 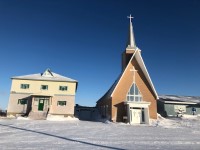 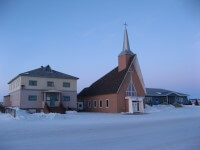 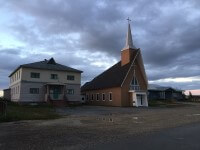 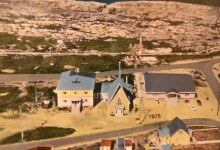 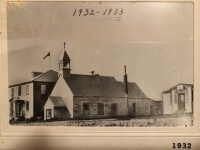 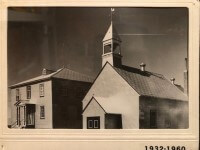 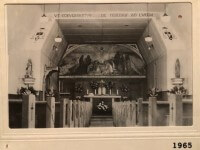 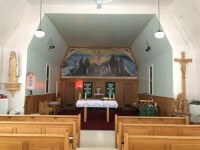 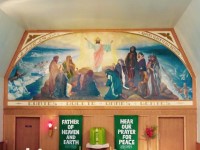 Churchill is situated on the shore of Churchill River before it flows into the waters of Hudson Bay. This is also the last northern community of Manitoba before the Nunavut Territory’s border. In the past the area was inhabited together by Inuit, Chipewyan and Cree, the fact confirmed by different campsites on the tundra around Churchill.

Known as a “polar bear capital of the world” Churchill is witnessing every year a major polar bear gathering on the shores of slowly freezing Hudson Bay (October / November). In the spring time beluga whales arrive towards the mouth of Churchill River to give birth to their young.

Towns history goes back to the year 1685 when Hudson Bay Co. established there trading post, replaced later by the Fort Prince of Wales, existing till today. In 1930 Churchill was linked to Winnipeg with 1,920 kilometers of rail. The trains were bringing to Churchill mostly grain which was being shipped from Churchill to Europe. The rail connection together with town’s localization made it become an important strategic place during the Second World War. A large airbase was built there in 1942 and further expanded after the War. The airport and rocket ranges are in use till today, although the base was closed in 1980. In 1960s and 1970s Churchill was also a regional administrative center for the government of the Northwest Territories, before the offices were moved to Rankin Inlet.

Today Churchill is a town with about 1000 inhabitants and an important communication center for the Keewatin Region’s connection to the south, especially Winnipeg.

To all interested in the history, culture and art of the Inuit Churchill is known for the Eskimo Museum operated by the Roman Catholic Diocese of Churchill - Hudson Bay.

[If you are looking for further general information about the town, a good place to visit is The 2004 Nunavut Handbook .]