It was father Arsène Turquetil OMI  to built the first permanent mission among the Inuit of Hudson Bay, in Chesterfield Inlet, at the end of the year 1912. This was already his third attempt to approach the Arctic. In 1901 a frozen knee obliged him to return from his trip. In 1906 he spent seven months with the Inuit in the Kazan River area, studying their language and customs. Finally in 1911 he was sent by Ovide Charlebois OMI, bishop of Keewatin, who was responsible for the organization of the Church in the vast area from Keewatin up to the North Pole. After having consulted the Inuit at Churchill father Turquetil decided the construction of the church in Chesterfield Inlet. The reason for Chesterfield was its central position in the Hudson Bay area and from there a possibility of reaching other important settlements.

The celebration of 75th anniversary of the Chesterfield mission in 1987 was a good opportunity to look back at the apostolic work accomplished among the Inuit. Newly ordained as a bishop of Churchill - Hudson Bay Rev. Reynald Rouleau OMI referred then to the Church of Chesterfield Inlet as the “seed” of the Diocese that remains in existence 75 years later. Then he referred also to the seed of the gospel that produces fruit in the community and in the people’s lives. Chesterfield was the cradle of the Diocese and the place of “prophetic” initiatives, as bishop named the foundation of the St. Theresa Home, formerly a hospital and nowadays a healthcare center for people with different disabilities.

At the homily delivered in Inuktituk by Fr. Robert Lechat OMI, on the same occasion of 75th anniversary of the Church in Chesterfield, resounded a prophetic voice looking at the future of the Diocese. “If all of us, believers, priests and lay people, work together for the progress of the faith we can make it really grow - if we work hard enough. From the Inuit to the Inuit, this is the way the faith has to progress in Inuit country. In the past you had no catechists, no parish councils... You want to arrange for your future and the future of your children because this land is yours, a gift received from the Creator. Your priests would like you to run things in the matter of faith because the faith is also yours, a gift you received from your Saviour Jesus...

Chesterfield Inlet or Igluligaarjuk, meaning in Inuktitut "a place with few igloos", is considered by some people the oldest continuing community in the eastern Arctic. Already in 1912 both Roman Catholic missionaries and the Hudson Bay Company opened here their permanent residences.

Until 1950s Chesterfield Inlet was an important center of the eastern Arctic with large RCMP barracks, main supply buildings for the Hudson Bay Co. and central Roman Catholic mission. Yet slowly the town lost the competition for the local importance with the growing community of Rankin Inlet.

Today the community is one of the smallest in Nunavut, counting 363 inhabitants (estimates of the year 1999). 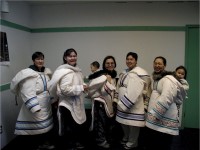 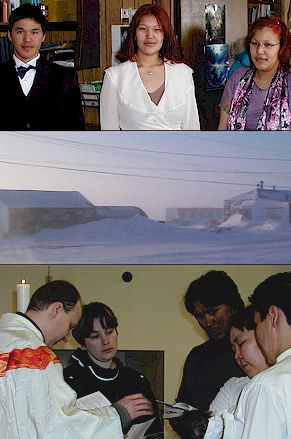