The Catholic mission in Pond Inlet, built on the side of a small hill was founded in the autumn of 1929 by Etienne Bazin OMI (1903-1972) and Prime Girard OMI (1883-1949). The first Mass in Pond Inlet was celebrated by Fr. Bazin on September 8th 1929, in a building that the officers of the Nascopie, Hudson Bay Company's ship, helped to construct. That same month Fr. Etienne Bazin erected the cross which stays there until today on top of the hill facing west watching over the very first part of the settlement that grew very fast...

Facing the mission at about 25 km north lies Bylot Island whose interior is one immense icefield from which, with great noise, enormous sections detach themselves in summer, forming huge icebergs drifting away.

From the beginning, missionaries were dedicated to the Tunnunirmiut tribe (its name means "the people on the back of the earth"), considered the last tribe north.

According to the memories of the missionaries of that time, during his first six years in Pond Inlet, Fr. Girard baptized only few elders or infants on their deathbed. The first baptism was celebrated in Pond Inlet in November 1929. Ututsiaq was one of the first Inuit baptized at the Roman Catholic Mission. In 1936 there was only one Catholic Inuk, Helene Ublurear, baptized at Igloolik, the oldest Inuk woman north of Baffin Land.

Pond Inlet - formerly written Ponds Inlet - owes its name to John Pond, a British astronomer, a contemporary of the John Ross expedition in 1888, and is situated at 72 41’N, 78 00’W, about 700 km north of the Polar Circle.

The Inuit call Pond Inlet Mittimatalik or the resting place of Mittima, an Inuk whose memory has been perpetuated through the years. Ancient tombs, some dating back to more than a thousand years, are the proof that Pond Inlet has long been inhabited.

Back in 1930-ies Inuit were coming to Mittimatalik mostly in the spring to trade furs and to spend few weeks at the trading post or at the mission. Remaining in small groups of two or three families they were continuously traveling in search of caribou, fox, seal or fish. 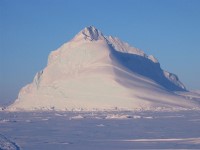 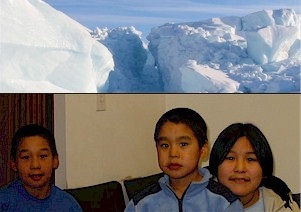