Immaculate Heart of Mary
Foundation of the Roman Catholic Mission

The original mission of Gjoa Haven was founded in 1951 by Fr. Pierre Henry OMI, called "Kajualuk" ("red beard") by the Inuit. Kajualuk and his guide Uttiuk carry the heavy rocks and clay needed for the foundations. Two shacks acquired from Paddy Gibson, the Hudson’s Bay Company manager were dismantled and reborn as the mission devoted to the Immaculate Heart of Mary.

Near the mission Kajualuk built a small school and himself was teaching children. Some boys without families found even a place to stay at the mission. They were famous Kajualuk's "tiguak" - "adopted". Father Henry remained in Gjoa Haven until 1961, when he had to be evacuated to Chesterfield Inlet's hospital because of bad health condition.

A local Inuk, Walter Porter (who died unexpectedly at the age of 35) is seen as the spiritual leader and inspiration of a new era of participation of the local people in positions of pastoral leadership in the Diocese. Already in 1966 Walter Porter animated the parish of Gjoa Haven; he taught catechism, led religious services and was authorized to distribute Holy Communion. This was an example of strong involvement which The School for Catechists in Pelly Bay, founded in 1968, was trying later to promote.

At the back of the present church (built in 1987) there is a mural painted by Fr. Lucien Schneider OMI. It is one of two surviving artworks that adorn Catholic churches in the Diocese painted by this famous priest renown for his linguistic work in Nunavik.

Catholic missionary activity in the area is trying to favorize positive encounter between Inuit culture and Christian tradition. All the celebrations are conducted in Inuktituk and English, according to the needs of participants. Traditional Inuit symbols are included in the liturgy (the rhythm of drum, stone lamp - kudlerk). Missionaries can be visited at any time and are available not only for the Catholics. The ministry includes also relation to the missionary tradition and travel in the wider region of Kugaaruk (Pelly Bay), Taloyoak (Spence Bay), Thom Bay (Ikpik) and Gjoa Haven. The current priest, Fr. Tony Krótki OMI, utilizes Gjoa Haven as his base to travel to Taloyoak and Kugaaruk. In winter he often travels by snowmobile.

At the present time four local leaders are involved in the ministry to the people. They are: Peter and Simona Akikungak, Miriam Aglukkaq and Ruth Ruben.

Anthropologists have distinguished seven different Inuit groups, each with their own customary hunting territory and particular tradition. These groups have travelled to the Gjoa Haven region. Their descendants now form the town's current population.

In 1927, the Hudson’s Bay Company (H.B.C.) established a trading post here, and today they (the Northern Stores) along with the Qikitaq Co-op are the two main grocery/dry good stores providing services in the community.

Subsistence activities of traditional importance to this community are seal hunting, caribou hunting, musk-ox hunting, polar bear hunting, and fishing for char, trout and whitefish. Today, the people in the region permanently reside in housing provided in the hamlet but continue to hunt and set up seasonal camps as part of their lifestyle. Many residents in the Gjoa Haven community are famous for their soapstone and whalebone works of art. These figures, with their startled or grimaced faces, seem to portray an altered spiritual or psychological state of being. Many are humerous in content.

Today the community has regular air service from Cambridge Bay (Nunavut) and Yellowknife (Northwest Territories) There is a modern school and health centre (nursing station) and government agencies provide numerous services. Some students from the neighbouring community of Kugaaruk come to Gjoa Haven to complete their secondary education. 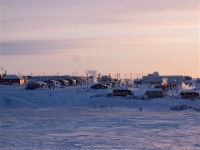 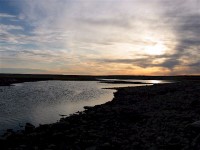 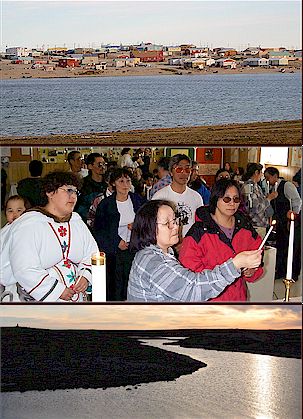