Sorrowful and Immaculate Heart
Foundation of the Roman Catholic Mission

The mission of Hall Beach was founded during the summer of 1969. The entire personnel of the Catechist School in Pelly Bay, expressing its gratitude towards Father Van de Velde, long time missionary in Pelly (today’s Kugaaruk), went to Sanirajak to help him buid a chapel-house. It was constructed near the Dew Line Site.

September 19th, 2004 was a special day for our community. At the liturgy of the Holy Eucharist Fr. Tony officially introduced new person to the status of Presiding Leader as we refer to the Inuit serving their own as a church leaders. Timothy Qamukka was born and raised north of Igloolik. At the age of 6 his mother died and the father had to assume both parents’ responsibility.

Descending from a family of very strong Anglican tradition Timothy married Sabina, a middle child of 16 siblings in her own family. She had been born in Igloolik and her family was very Catholic. While they lived in Iqaluit years ago going to church was not questionable. So every Sunday morning they would leave home together but father would go to his church and the mother with children to her church.

After a while Timothy decided, that it should not be this way. He made decision to go together with his wife Sabina and their children. After many years of faithful church participation and involvement Timothy decided to make a step forward in his commitment to God, Church, and Baptismal promises.

As of Sunday September 19/ 2004, after a longer preparation, a ceremony of welcoming Timothy to the service of his people had been in place. Now Timothy will help our faithful leader Joe Piallaq, originally from Repulse Bay, to deliver services and share the Word of God as well as give Holy Communion on Sundays and prepare other liturgies and ceremonies.

All his married life Timothy and Sabina lived in Igloolik. Four years ago Timothy was offered job in Hall Beach. After he accepted it, his whole family (he has one daughter and two sons) moved to their new hometown, 82 km away from Igloolik. Since then already Timothy was helping Joe and his wife Gemma at the church. Now he will be a part of a team. The community is very happy to have someone with new energy, new ideas. It is good to share the responsibility when one can go hunting and the other one keep an eye on the affairs of the community. We are blessed again.

Hall Beach is located on the Melville Peninsula, around 40 miles south of Igloolik, and surrounded by the waters of the northern Foxe Basin. It’s Inuktituk name, Sanirajak, means “situated along the coast”.

The community was created after construction, in 1957, of the Distant Early Warning (DEW) Line site in that area.

Hall Beach together with the Hall Lake, situated west of the town, are named after an American explorer Charles Francis Hall who came to the region in 1860s and traveled with the Inuit.

The permanent settlement in Hall Beach begun in 1950s and 1960s. Today the town’s population is over six hundred people (619 according to the estimates from the year 1999). 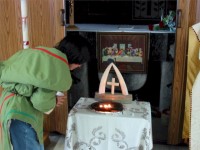 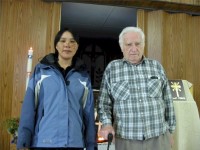 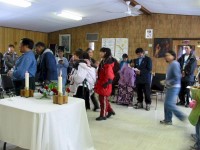 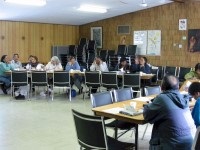 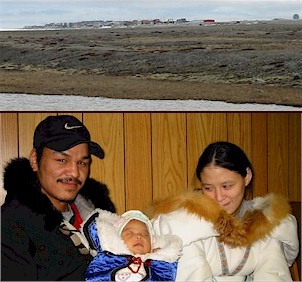