Fr. Pierre Henry founded the Pelly Bay mission in 1935. Pelly Bay became famous for its buildings constructed with local stone and clay mortar mixed with seal oil. At one time there were 7 buildings. Two structures remain today including the famous stone church (built in 1941).

The building, constructed with a wooden interior measures eight meters by five. The local Inuit helped to haul the stones from a nearby island. The cross atop the belfry of this church was donated by the famed Corporal Henry Larsen of the Royal Canadian Mounted Police in 1942.

The current structure (6500 sq ft) was built in 1998-1999 with funds raised by the Diocese and the local community. It can accommodate 400 people with an additional overflow area that can seat 150 people for liturgical celebrations or other community events.

Pelly Bay was the site where the most important film documentary prepared on the Canadian Inuit was filmed in the 1950s (the Netsilik Eskimo Film Series - currently distributed by the National Film Board) Fr. Guy Mary-Rousseliere OMI was the Assistant Director and played an instrumental role in the success of this production.

The life-long efforts of missionary Franz Van de Velde OMI to record the life of the people in the region through photographs, the collection of Inuktitut geographic names, and family genealogy is monumental.

The community is predominantly Roman Catholic. The parish is facilitated with the help of local lay leaders who have served their church faithfully for many years. Initial programs to form local lay leaders for the Diocese (6 couples) were undertaken in a “school for catechists” operated from 1969-71 in Pelly Bay.

The community of Kugaaruk (68 53’ N, 89 51’W; population 539, 94% Inuit) is located at the mouth of Kuugarjuk River in southeastern Pelly Bay. The first recorded contact between Inuit and Europeans in this region occurred when John Ross’s Northwest Passage expedition of 1828-33 wintered here.

In 1854, John Rae met Inuit in Pelly Bay who gave him news of the tragedy that overcame Franklin’s last expedition, of which nothing had been heard since 1845. The first white person to live in the Pelly Bay area was a Roman Catholic missionary, Fr. Pierre Henry OMI, a member of the world-wide missionary order, the Oblates of Mary Immaculate.

Until a federal day school was opened in 1962 Oblate priests were the only non-Inuit residents in the community. They travelled by dog team to the outlying areas to visit their parishioner and travelled during the winter to Repulse Bay and back by dog team and sled to bring needed supplies. The Arviligjuarmiut in the region converged on the mission to celebrate Christmas and Easter.

Seal, caribou and fish were the most important species in the traditional economy of the Arvilijuarmiut of Kugaaruk. Arctic char (a member of the salmon family) caught in the Pelly Bay region in the Kellett and Kuugarjuk rivers have the best reputation both in the Arctic and world-wide for their superior taste and colour. Today, the people in the region permanently reside in housing provided in the hamlet but continue to hunt and fish and set up seasonal camps as part of their lifestyle. The Koomiut Co-op is the main store in the hamlet and this local co-operative built the first houses constructed in the community utilizing the local labour force. The Co-op provides other services in the community and is considered one of the strongest co-ops in the Arctic Co-operative Federation despite the relatively small size of the community.

Fr. Andre Goussaert OMI was instrumental in promoting the co-operative movement in this community and later in the federation of co-ops in the Northwest Territories (Arctic Co-operatives Ltd). Kugaaruk has regular air service from Cambridge Bay (Nunavut) and Yellowknife (Northwest Territories) There is a modern school and health centre (nursing station) and government agencies provide numerous services. Snowmobiles and all-terrain vehicles are the regular mode of transport in the community.

The name of the community changed from Pelly Bay to Kugaaruk in 1999. This refers to a river running through the community. 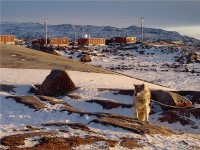 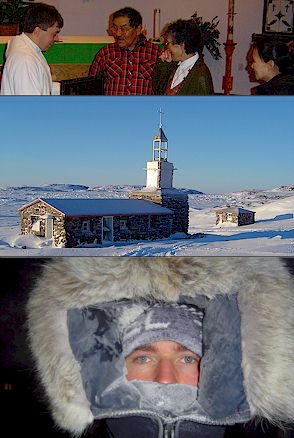