50 years after establishing the Roman Catholic Mission on King William Island by Fr. Pierre Henry OMI, the community of Gjoa Haven is celebrating great events. The 50th Anniversary Celebration of Catholic tradition in Gjoa Haven had begun already in January of 2001. The closing ceremony of the Jubilee year was the most beautiful occasion to begin our Immaculate Heart of Mary's Mission 50th Anniversary. Our community has celebrated baptisms, marriages and renewal of marriage vows and confirmation in a very special way. We had few days to commemorate life of Fr. Henry. We organized two evenings where we would invite Inuit that personally met and worked with Kajualuk, to share their stories, unforgettable experiences and wonderful as well as painful times spent together with him. His presence in the life of so many was life giving. Our people testified to the joyous moments and to the sacrifices Kajualuk would undergo in the time of his service to the Inuit he loved to the end. Kajualuk was a true Apostle of Christ, true witness to the Gospel, man of prayer giving his life to others. January of 2001 was also the year, that the Inuit culture and tradition made an incredible step forward on the road to evangelization. For so many years the Inuit drum was forbidden from the liturgy of music of Christianity in this part of the world, but not any more. With great respect to the tradition, sound of the Inuit drum, filled the church of Immaculate Heart of Mary. Overwhelming experience that you would never have before, was very exceptional. What a wonderful feeling.

Blessing of the married couples - Philip and Lucie Nimiqatqtuq, married for 50 years. 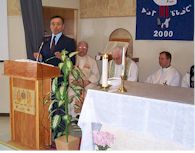 Feast after the service.