From the 14th to the 17th of April the lay leaders of the Catholic Communities of the Central Arctic met in Taloyoaq. They were accompanied by father Bogdan Osiecki the pastor of the communities and sister Dorica Sever from Gjoa Haven and Father Louis Legaré who was visiting the region after spending Easter in Kugaaruk Barthelemy Nirlungayok of Kugaaruk was chairing the meeting.

On the agenda: During the first 2 days the leaders had an opportunity to share their personal lives in a climate of mutual acceptance.

Then we spent some time reflecting on the Commandments of God and how they can be lived in our communities. We then reflected on the Life in the Spirit as described in Saint Paul's letter to the Romans, as the Christian way of living the commandments.

Later on came questions about fasting in general and about Eucharistic fast and the commandment of the Church about Easter duties.

Some leaders are preoccupied about some young people not attending Church and taking drugs and a lack of respect for parents. Part of the problem seems to stem from the lack of discipline on the part of some parents.

On the last day we were introduced to the Chaplet of Mercy by Ben Porter of Gjoa Haven and together we recited the chaplet at 3 pm as is the custom.

Finally after our last Eucharist we were invited to a community feast and drum dance at the Arena. It is good for leaders to find strength in one another before returning to their home communities to continue to serve their people. 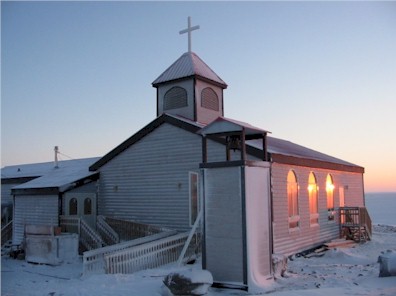 The church in Taloyoak