50 years after establishing the Roman Catholic Mission on King William Island by Fr. Pierre Henry OMI, the community of Gjoa Haven is celebrating great events. The 50th Anniversary Celebration of Catholic tradition in Gjoa Haven had begun already in January of 2001...
Read More

Oblates From Our Delegation Meet in Gjoa Haven

On the occasion of the 50th Anniversary, the Oblate Fathers working with the native people in Nunavut territory, had gathered in Gjoa Haven for their annual pastoral as well as Oblate Community meeting. Again great opportunity to celebrate together with people we serve...
Read More 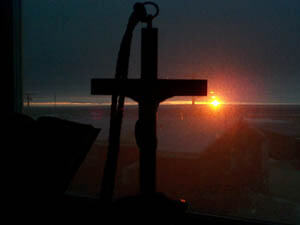 Eve of the Second Sunday of Easter was sort of busy up here in Pond Inlet. The family of Leo and Maina Maktar came to decorate the church. The occasion was their 25th Marriage Anniversary. Some were decorating inside of the church and some were preparing a little snack for the reception...
Read More