The mission of Baker Lake was founded in 1927. It was built on the west bank of the lake with wood initially bought to build the Pond Inlet mission. Nascopie - the ship of Hudson’s Bay Company - changed its schedule and material was unloaded in Chesterfield Inlet, from were was transported to Baker Lake. The construction progressed despite bad weather conditions, thanks to the zeal of Oblate Fathers Marcel Rio (1899 - 1992) and Armand Clabaut (1900 - 66). Three years later Fr. Rio bought some abandoned buildings from the Dominion Explorers, moved them to the north shore of the lake, approximately where the new mission built in 1957 stands today. The nucleus of the local Catholic commumnity was formed by few families living around the Kazan River and at the entrance to Baker Lake.

Tragic Challenges of the Missions

It may be somehow romantic to imagine missionaries traveling hundreds of miles through the vastness of the North, accompanied by the Inuit guides or alone, visiting camp, fishing and hunting just like the Inuit. But reality not always confirmed that image. The missions witnessed many dramatic moments during their history. In 1934 Fr. Rio, returning from missionary trip in the Paddle region, learned of disappearance of Fr. Honorat Pigeon OMI in the vicinity of Chesterfield. Fr. Pigeon was returning on foot from his ministerial voyage; his body was never found. Nine years later mission of Baker Lake witnessed another drama - Fr. Antonin Mouchard OMI, exhausted by the famine shared in the Kazan camps, had lost his mind and had to be evacuated.

Baker Lake - both the community and the lake on which shore the town is situated, are called in Inuktituk Qamanittuaq, “big widening of the river”. With more or less precision Baker Lace could be considered the geographical center of Canada.

The area is particularly interesting from historical, archeological and geographical point of view. It’s mainly because of the vicinity of two big rivers - Kazan River and Thelon River, both important in the life of the Inuit for centuries.

At the present time Baker Lake is a large community with the population about 1500 people (according to the estimates of the year 1999 - 1439 people were living in this hamlet). This is the only inland community in Nunavut. 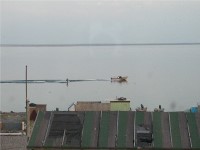 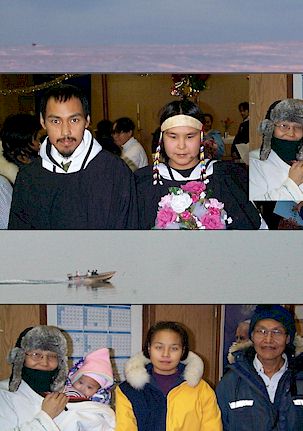