St. Michel and Our Lady of Victories
Foundation of the Roman Catholic Mission

The parish (Saint Michel) in Taloyoak was established as a station from Kugaaruk (formerly Pelly Bay) by Fr. Pierre Henry OMI and Fr. Rogatien Papion OMI in 1954. Construction material for the building was brought by Fr. Henry and his helper Idjukka from an abandoned cabin at Pasley Bay where the R.C.M.P. boat, the St Roch spent the winter of 1941.

The present church in Taloyoak was built in the Sixties (a new one is being constructed these months and hopefuly will be ready to use before Christmas). At the back of the church there is a impressive painting of Our Lady of Perpetual Help that originally was located in the Thom Bay mission which was under the patronage of Our Lady.

The construction of the new church and mission in Taloyoak has begun in the summer of 2001 and has been completed at the beginning of November 2001. Those who are passing through Taloyoak and see the new building are spreading the news about it simply in the words: "It's really nice church!". The renovation and extention of the Catholic church in Taloyoak was long awaited, the old building being one of the most "aged" in the whole town and yet serving the community in the every day activities.

The catholic community in Taloyoak is small (around 100 of people). Weekly Sunday prayer is led by the local leaders and once a month by the Oblate Father coming from Gjoa Haven.

A small mission at Ikpik (Thom Bay - 60 km from Taloyoak) was established in 1948 by Fr. Pierre Henry OMI. The place is of oustanding beauty and rich in different species of animals which would have made it a good place for an Inuit settlement. Since the boats with provisions started arriving to the opposite side of the peninsula, Inuit moved there, and Ikpik is today only a historical site and touristic attraction for those, who prefer boat or snowmobile to the plane.

Actually Thom Bay seems to be an early settlement from 40 - 50 years ago, from time, when there was only a mission building or trading post in one place, surrounded at times by villages of snow houses. For those who love the North it is a beautiful place to go and experience the past.

There is also an old stone church In Taloyoak. The old stone church, constructed with local materials has been given to the hamlet to be used for heritage and non-profit ventures. This old mission was originally built by Fr. Pierre Henry OMI and Fr. Rogatien Papion OMI and Charlie Aglukkaq.

Formerly called Spence Bay, Taloyoak officially changed it name in 1992 to its Inuktitut name which refers to the “stone caribou blinds” constructed by the Inuit to hunt barren-ground caribou in the region.

The region was explored by Sir John Ross’s Northwest Passage expedition, 1829-1833, which spent four winters locked in ice on the east side of Boothia Peninsula. While the main population are part of two groups known as the Netsilingmiut and Ittuaqturvingmiut the current population is comprised of a number of different groups including people relocated to the region from Pond Inlet and Cape Dorset in 1937.

A Hudson’s Bay Company post was established in the region first at Fort Ross on Somerset Island (1937-1949) and then at Spence Bay (Taloyoak) in 1949. Today the Hudson’s Bay Company (the Northern Store) and the Paleajook Co-op are the two main grocery/dry good stores providing services in the community.

Subsistence activities of traditional importance to this community are seal hunting, caribou hunting, musk-ox hunting, polar bear hunting, and fishing for char, trout and whitefish. Families began to settle permanently in Spence Bay after 1962. Today, the people from the region permanently reside in housing provided in the hamlet but continue to hunt and fish and set up seasonal camps as part of their lifestyle.

Taloyoak is known for its famous packing-dolls made from duffle material. These dolls that represent various animal species are highly prized by collectors world-wide. One of the more popular dolls is a female snowy owl with its little baby chick in the pouch in the back hood of the traditional Inuit parka (amauti).

The community today has regular air service from Cambridge Bay (Nunavut) and Yellowknife (Northwest Territories) There is a modern school and health centre nursing station) and government agencies providing numerous services. Local transport is mainly by snowmobile and all-terrain vehicle. 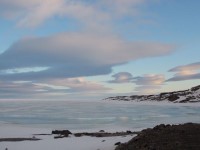 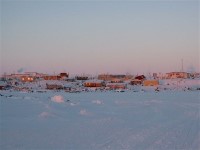 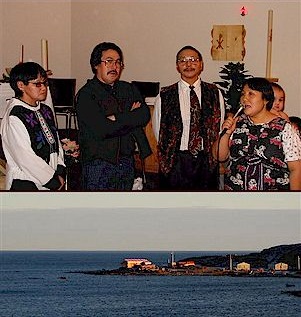