Very important role at the beginnings of the Catholic community in Igloolik played Pierre Maktar, an Inuk from Chesterfield Inlet, who was teaching the elementary prayers and the Inuktituk hymns composed by Bishop Turquetil OMI and first missionaries. Father Etienne Bazin OMI(1903-1972) settled at Abvajar Island in a shack made of old boxes, with walls covered with paper of all kind. The shack was consumed by the fire in 1933. In 1937 Father Bazin followed the Inuit who settled at Igloolik and lived in an igloo they helped him to build. The same year Father Jean-Marie Trebaol OMI (1905-1988) started the construction of the first mission.

Build in early 1930s Roman Catholic mission was the first permanent building in Igloolik. By the end of 1930s there was also a trading post operated by the Hudson Bay Company. But it was only in 1950s and 1960s that the permanent settlement was established as a town of Igloolik. The government build a school, nursing station and RCMP station and the Inuit started to move into the community from their camps.

In the summer of 1946 Fr. Guy Mary-Rousseliere OMI (1913-1994), already missionary at Pond Inlet, had spent a few days at Pingerkalik. He celebrated the Eucharist for the Inuit camping there and had drawn a detailed plan of the ruins, estimating the number of ancient habitations for more than a hundred, with about twenty of Tunit type, rectangular in shape.

Father Mary was helped in a very special way by Monica Ataguttaaluk, nicknamed The Queen because of her respectable age and influence in the camps. She herself was spending hours digging at the excavations and was always willing to share her knowledge of the past and Inuit traditions. Father Rouselliere, later recognized for his scientific work in the Arctic, acknowledged that he owes his love for Arctic archeology to the Queen of Igloolik.

In the early seventies, at a time when the majority of Inuit were already gathered in villages and when the sometimes regrettable consequences of that concentration began to be felt, Fr. Louis Fournier OMI had the idea of establishing a camp, somewhat distant from Igloolik, so that a few families or individuals could come and spend a few weeks or months. The camp could also become a retreat center. It had to be located in an area of abundant game so that the campers could live off of the hunt.

Fr. Fournier set up a camp at Ikpik, on Baffin Land, about 250 kilometers east of Igloolik, in the spring of 1973. He spent there five winters, two of them all alone. During other three years from one to three families and several youths resided with him. In the course of the last winter many groups came there from Igloolik to take part in retreats under priest’s direction. Because of illness Fr. Fournier was obliged to leave the camp in 1978.

Ikpik remained unoccupied but attracting attention. In 1985 the Inuit Youth International Camp was held there.

Igloolik is located on a small island northeast of the Melville Peninsula, towards Baffin Island, at the opening of the Fury and Hecla Strait. The name of the town means in Inuktituk “a place with igloos”.

The community counts today approximately 1,400 inhabitants and is considered one of the most traditional in Nunavut - the Inuit heritage and traditions are guarded here with particular care.

The location of Igloolik facilitated an encounter of various Inuit cultural traditions of Baffin Island, Kivalliq Region and eastern Kitikmeot. Archeological sites on the island are confirming the presence of the Inuit in this area as far as 4,000 years ago. 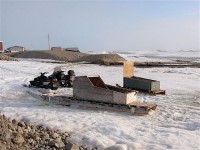 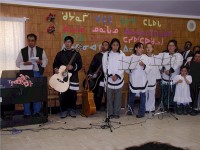 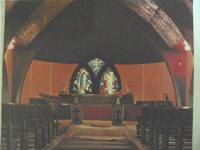 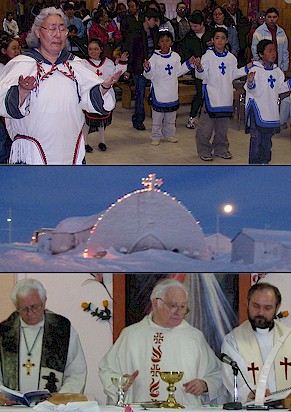